It is always advisable to install and test the new Operating System on the virtual platform before trying in a live environment. Especially a server version which we use in the production. In this guide, let me shows the steps I have followed to install Windows 2019 server LTSC and SAC versions on Oracle VirtualBox with Windows 10 desktop computer.  The Windows 2019 is built on the firm foundation of earlier Windows 2016 server. Windows 2016 was the popular and fastest adopted Windows server Operating System ever, and the Microsoft is expecting 2019 version to overtake it.

To learn more about what is new in Windows 2019 server version, you can check here. As the Windows server administrator you would love the new features it brings up.  The project Honolulu is something I’m incredibly interested and happy to have.

These are the significant difference between both Windows 2019 versions. I have shown the way of installing both Semi-Annual Channel (SAC) and Long-Term Servicing Channel (LTSC) on VirtualBox with Windows 10 host desktop. Find below major differences between both versions.

Let’s dive in the installation of Windows 2019 server on VirtualBox.

I have earlier published a guide in trying Windows 2012 R2 on VirtualBox with pre-installed VHD file from Microsoft; it worked fine also. At the moment, Microsoft Provides ISO and VHD file downloads of Windows 2019 server in their official website.

It threw the following error while attaching the VHDX, “Failed to open the disk image file..” with the “MediumWrap” “E_FAIL”. It is still doubtful whether VHDX is supported in VirtualBox for read and write access. It looks like it supports only read-only as of now. I used “vboxmanage clonemedium” command to convert the VHDX to VHD, it succeeded and converted the Windows 2019 Server VHDX to VHD. Also, this time I managed to add the converted VHD disk to the new Virtual Machine. But it did not boot. It gave the error saying the “No Bootable medium found.” To reconfirm the readability of the converted VHD file, I attached the disk to a working Windows VM and managed to open and read the content on the VHD file. I’m yet to find the solution in mounting the preinstalled Windows 2019 Server VHDX on VirtualBox and see how it works. I will update here when I find any working solution.

At the moment, we will see how to install Windows 2019 server on VirtualBox by ISO file.

It worked, but I’m not sure why you need to install a Server Core version in VirtualBox without Desktop experience. But for a full-fledged test lab setup, you can install in multiple VMs to test the feature of Windows 2019 server cluster and server farm.

I assume you have worked on the Server Core already; the installation is simple and straightforward. Download the ISO of Windows 2019 SAC from Microsoft and start installing.

1. Select the Operating System as “Windows 2016” as of now, since the 2019 version is not officially supported in VirtualBox as on the day writing this guide. 2. Make sure that Processor settings remain same as below. By default when you select the Windows 2016 version, it sets automatically. 4. Attach the downloaded ISO and start the Virtual Machine. 5. Select either “Standard” or “Data Center” version to install. I selected the Data Center version and continued the installation.

6. Once installation completed, you will get the first screen to set an administrator It is going to be the server core version; you need to play with the command prompt and PowerShell. Mouse and keyboard integration works fine.

7. With the ‘sconfig’ command you can configure the Windows 2019 Core on VirtualBox. 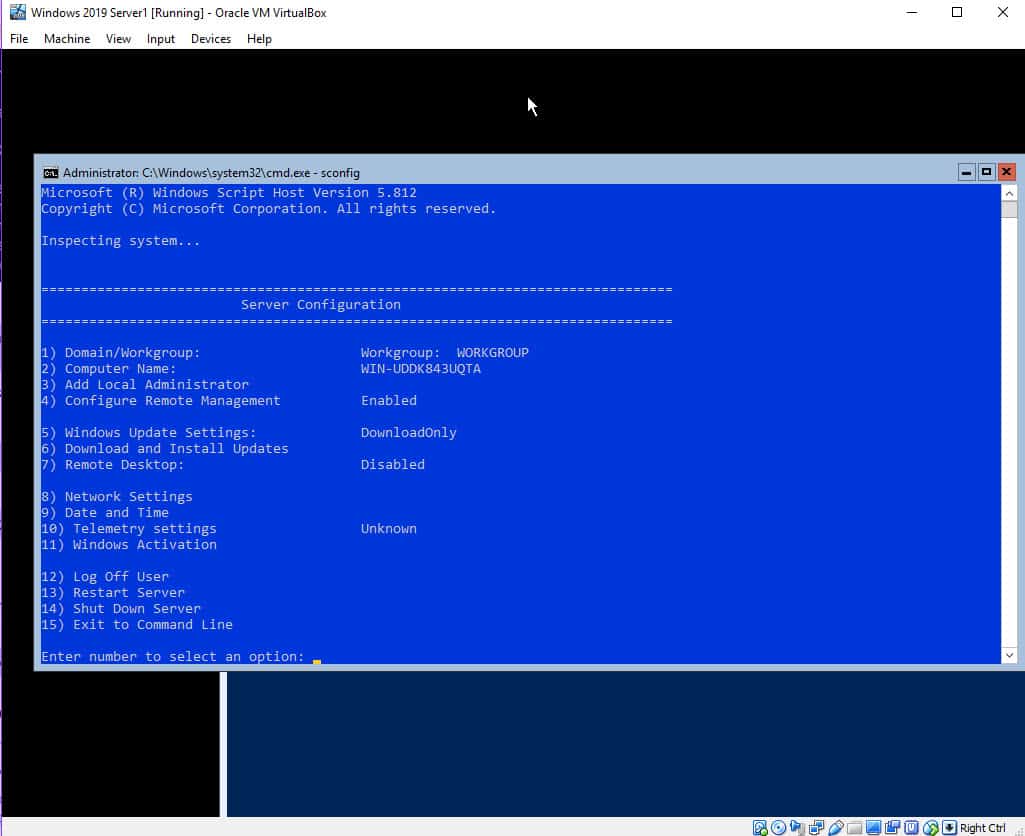 8. Network worked without installing VirtualBox additions inside VM (NAT type, it should work on any kind including Bridged or Internal only). Also, I doubt we can install Guest Additions on a VM which doesn’t have Desktop experience or GUI. So, we do not need to try installing guest additions on this Server Core.

9. The installation steps are same as SAC server mentioned earlier. Select the correct version you want to test with the Desktop experience as mentioned 10. You can leave the OS key; this will enable your evaluation Once the installation completed, you need to set a new complex password for Administrator account. You will land on the Windows 2019 server desktop which is almost identical to Windows 2016 and 2012 R2 versions.

Below is the first screen without VirtualBox guest additions. You can see the space between the console and Windows 2019 virtual machine desktop because no guest additions installed hence the auto size of the display not working. 11. Click on Devices and mount the guest additions as shown below. 12. It will be as the DVD disk inside the VM. Open it and execute the 64-bit version of it as shown below (even you can execute the normal one which will detect the OS and install the appropriate version). 13. Click yes to install if the warning comes as not trusted drive 14. Reboot the VM once it is completed.

15. Once it rebooted and logged in, you will see the better display, mouse integration and good response inside the VM. Also, the auto display re-size works fine.

Take a snapshot before you do any changes from this point.

There you go, you have both version of Windows 2019 server (LTSC and SAC) on your Windows 10 desktop or laptop by using Oracle VirtualBox. Hope this guide would be useful to your testing and demo lab at home or office.