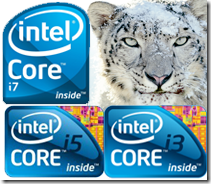 Installing Mac OS X Snow Leopard on latest Intel i3 and i5 processors with VirtualBox is slightly difficult job than installing on older processors. Our readers reported several failure attempts by earlier methods on i series. Already two posts published to solve this issue. This post just to summarize the both methods to install Mac OS X Snow Leopard on Intel i3,i5 and i7 processors with VirtualBox on your desktop or laptop computers.

I’m not showing any installation steps here, but existing articles will be useful here. As you must aware, VirtualBox doesn’t support Mac guest officially. It’s built-in EFI loader doesn’t work with original retail installation medium. Therefore, we have to use third party boot loaders to start up the installation and boot OS from installed disk normally. When these boot loaders unable to identify or communicate to physical latest Intel processors , we get problem.

The following steps go with two latest boot loaders specifically designed for i3,i5 and i7 processors to install Snow Leopard on desktop or laptop.

1) Install with iBoot Boot loader for i3 and i5 processors.

This is a famous boot loader to install Snow Leopard physically on local hard disk, which will allow to have multi boot option with other existing Operating Systems on i series processors. Here, we use the same iBoot to install on virtualization platform. It works better.

The developer of this products confirms it works on i series. The original boot loader available for download with more information here.

I have explained step by step to use iBoot with VirtualBox to install Snow Leopard on i3 and i5 intel processors. This can be updated to 10.6.4 also. MultiBeast to be installed after the OS X installation to boot directly from installed hard disk. Developer released updated version for Intel i3 and i5 including mobile processors. Older EmpireEFI worked well on core2duo and dual core processors. You can try this if above method one fails. There are some issues on this installation which mentioned in this post. 3) This is an optional and I’m not sure it will work.

The above two methods can be used to install vanilla kernel (original Snow Leopard installation) without any hacks or hackintosh versions on i3 and i5 computers. This method is available to install hackintosh version of Snow Leopard 10.6.2 Intel AMD by Hazard on VirtualBox. This ISO works without any boot loaders, which means, you do not need to use iBoot or EmpireEFI. The built in VirtualBox EFI boot loader managed to start up the installation from ISO and boot the OS from installed hard disk later.

Therefore, this may work on i3, i5 and i7 processors as longs as VirtualBox EFI boot loader works well. I suggest to use this way only if the above two methods failed. Read the original post to use Hazard on VirtualBox

Unfortunately, I can’t test and confirm any of the methods on Intel i series processors, because I don’t have it. But, comments from these posts and developers’ blogs shows these methods should work mostly.

Feel free to share your success and failure stories. Let’s help others by specifying your system configuration also.

21 thoughts on “Mac OS X Snow Leopard on Intel i3,i5 and i7 Processors With VirtualBox”